Jeremy and Beatrix by Julie Gengo

Here's another one from a few years back....I wonder what I was thinking back then and who about???? Enjoy...Listening to Parquet Courts while I post this.... 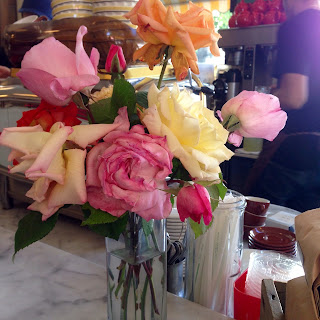 As she usually does on Saturday morning, Beatrix was pulling up the weeds with vigor. She liked to make a contest of it all, challenging herself to uproot an entire section with one try. This made her happy and at times, prompted her to shout “YES” out loud.

This time, her yes was particularly loud, so loud that it caught the attention of an unexpected visitor.

“I heard that,” Jeremy said as he turned around to say hello.
“Hello. It's Beatrix isn't it?” he shouted back as he leaned his bike against the fence that encapsulated her garden from the rest of the world.

“I was just on my way to town to pick up some tickets for this band that I hear is really fantastic when I heard you shout. I thought you might need some assistance.”

He didn't wait for her to reply. “I'm Jeremy and it's lovely to meet you,” he said as he peered over the fence, closer to where she was working. Jeremy had wanted to do that for quite some time, but his nerve always got the best of him.

In a normal day, he just looked up and smiled as he passed by, but today was anything but normal. He had woken up with a good feeling about everything. There was a buzz in the air that warmed his fingers, turned off his doubt, and kept him from riding on.

“Can I come in?” he said, without hesitation.

Beatrix stood up, wiped her hands on her dress and reached out to shake his.

“Town? Aren't you taking the long route?” she said.
Beatrix was curious. She had seen him before, passing by on this bike. He always seemed to be smiling. She liked the idea of smiling back but usually just kept on gardening as if she didn't notice.

“Well, it's more scenic this way and besides I was interested in what you were growing there next to that bunch with the small white flowers,” he said.

“Turnips,” she replied.
Beatrix had a thing for turnips. Their round onion like body had a splendor that made her happy and they also worked well in her soups.

“Perhaps you would like to try some sometime? Turnips make my soups a bit sassy,” she said as she smiled.

“Okay then.” Jeremy lifted his eyebrows in anticipation. He liked the idea of soup with turnips, but her words took him by surprise. After all, she had always been a mystery. He imagined her to be rather reserved and he thought she was pretty, yet completely unknown.

“You can, if you like,” she said. “I mean not to be rude, but Beatrix must remind you of...” She interrupted. “The Potter stories? Well it’s not like I have friends that are mice running around and a pet rabbit named Peter. The cat takes care of the mice and...well.” Beatrix laughed. Jeremy amused her.

Jeremy on the other hand felt very stupid for ever bringing up the subject. His words were losing their way and his face turned a blush rose that matched the flowers behind her.

He did muster up enough of whatever it is he needed to ask Beatrix to join him to see the band that was playing the following week. She thought about it for a moment and told him she would think about it and let him know soon. “I have to check with Mrs. Puddle Duck to see if she can keep an eye on the soup,” she giggled.

“Super," Jeremy said as he hid his face in his hands. "I'll pop 'round in a few days.” He then made his way down the road and in a few moments he was out of sight. The idea of turnip soup and Beatrix kept him smiling the entire way into town.
Posted by bluberriesonmars at 10:48 AM 2 comments: